Ahhhhhhhhhhhhh...(that's a pleasant sigh, not a scream)

It's been a while since I've had some uninterrupted time in the studio, and I was blessed just that yesterday. Brian has Mondays off now due to his new position at Habitat, so he agreed to hang out with Guthrie to give me some time to work. It felt so good to get my hands on some clay. I'm working on filling a gallery order of mostly handbuilt pieces and thus decided to tackle making some wall pieces. 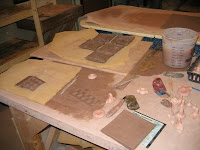 Here are a few in process. Below are nine tiles, halfway finished. I start with thinly-stretched slabs, cut and stamp them, and then pinch together the seams. 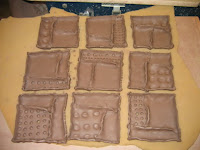 Here's one receiving its border, which is pinched on as well. 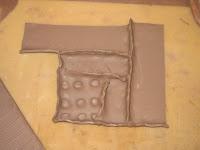 The clay is then rolled/folded to create a frame (this is the backside, by the way). 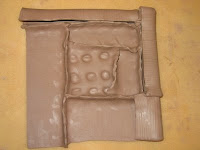 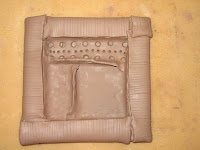 A slab with 2 holes, in which to later thread wire, is attached. 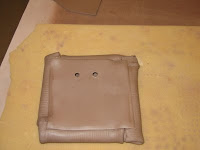 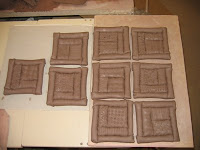 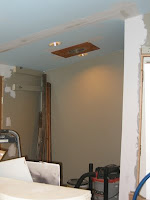 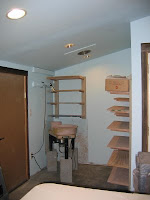 Aside from demo pots from my handbuilding classes at Clayworks, I haven't been making anything for the past couple of weeks. Brian and I (well, mostly Brian) have been renovating the studio: we tore out a closet and moved my wheel and wareboard shelves over into that area, and then Brian built a big section of permanent shelves in the corner where the wheel used to be. 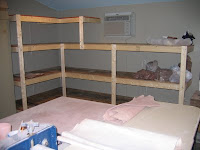 This will make the space way more efficient and give me more storage for works in progress. I'm really excited about getting back in there to create: the forced "vacation" has been wearing on me and I've felt a little down recently as a result. It goes to show that we who are made to create, must.

The man himself: Brian stands in his renovation glory: 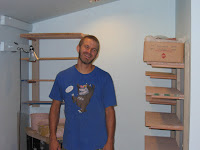 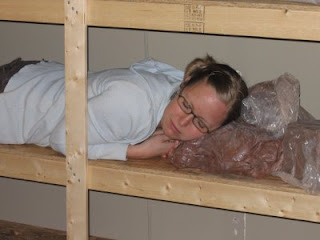 The new shelves are so nice that I think I'll just sleep out here tonight....clay makes a great pillow.

Guthrie has something to say!

Guthrie is very concerned about the state of the US these days, so he recently joined the National Baby Union (not to be confused with the Union of Babies in America) which is endorsing the Obama/Biden ticket this fall. 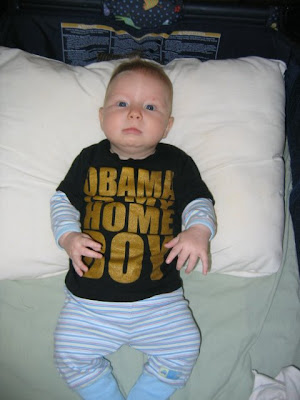 So, if you're for babies, you need to check out a great fundraiser that some potter friends and colleagues are promoting: Obamaware! 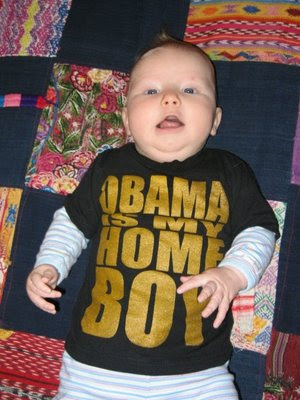 Circle show at Lark and Key

Tonight was the opening of our Circle of Eight show at Lark and Key. It was a beautiful evening on a gallery crawl Friday, so many people were out and about. Julie and Sandy (the co-owner of Lark and Key) did a great job setting up the show- our pots were displayed very nicely.

We were honored to have Diana Fayt as our guest artist for this show. I have admired her pots for some time and it was really exciting to see a small collection of them at the show. The surfaces she creates are very rich; it's easy to spend quite some time exploring each pot. 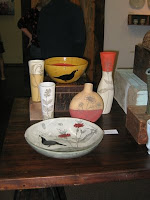 Here are some of my pots...plus Julie's little tumblers in front 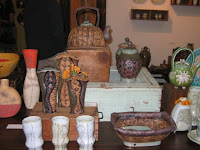 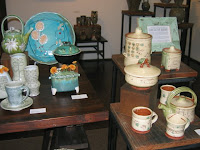 Ron's platter and work by Adrienne... 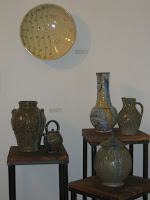 Pots by Julie, Jen and Greg... 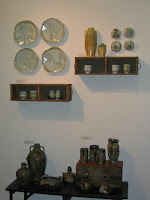 Lark and Key carries my work typically, so here's some of the other work I have there on display... 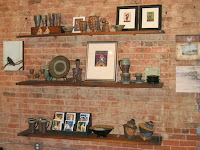 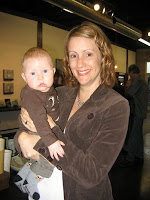 A real treat for the night was having Guthrie at the opening. He stole the show, of course, and welcomed me to the gallery by spitting up all over me about 3 or 4 times. Thanks little man! He was super cute in his brown (which somehow we were all wearing, so he fit right in). Here's Sarah and Ron Philbeck getting their Guthrie fix! Such naturals! 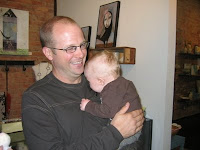 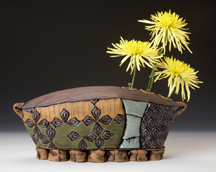 Our little guys: Sammy and G 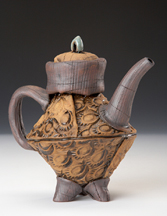 Where to find my work